When Hitching Turns Bad and then gets Worse

I was in high spirits as I finally bid Bellingen (ahhhh, what a heavenly heavenly place) farewell - the people there give the nicest hugs! Even though it was raining I was okay - it's generally easier to hitch hike in the rain. In fact I didn't even make it to the hitching spot 100m down the road when a friendly trucker pulled up and told me to hop in. Andy even pulled over for me to see the waterfalls and the scenery as he drove me to Dorringo.

I was on my way to a farm job in Orange (A town 500 or 800 km South West from Bellingen) - I was finally going to mark off the remaining 46 days of rural work that I needed for my second year visa which I need if I ever decided to brave Australia again! I was pretty chuffed that I'd secured a job and was even more chuffed that all my timings were going to work out perfectly!!

It felt like I had stood there for hours [but it was probably more like 15 minutes] when Julian pulled up in his ute. His cap was pulled low and his sunnies were on, but he smiled. "Where you goin?" I asked - "Armidale" he replied. "Mind if I jump in?" He seemed surprised that I did and then carried on rolling his joint.

Julian told me how he was presently on the run from the cops as we sped at 140km/h down the windy road - he wouldn't tell me why he was running from them - just that he's packed up house that morning and was going to hide out in Armidale at his secret house for a while. I tried to plaster a fear hiding smile across my face and tried to find a new topic...  "Kangaroos..." Then he steered off the main road and I started to get really worried - he sensed my panic. "Don't want to go through any of those police checks" was his excuse - but I'd watched Wolf Creek and I knew that he really just wanted to murder me in the middle of nowhere!

"If you like kangaroos you really ought to come and see my house" he said. I thanked him for the kind offer but refused - "there are kualas too" he threw in as if he was an infomercial. "I'm really okay to get out here" I said in my head - but I couldn't think of an excuse to use with it and we were now on back roads so back that there were no cars anywhere... My brain started hyperventilating!!

As we continued towards somewhere passing "Armidale" after "Armidale" signs pointing in the opposite direction Julz told me about his days as a bikee and told me how he was now a kangaroo whisperer. He can talk to them - it's apparently the language of the clicking tongue.  I nodded believingly but was more  focused on watching for oncoming traffic to wave down and shout "help!!"

"Let me just drive you to Orange" he said. Why did I tell him where I was headed?? Why?? "I need to meet up with a friend this evening" I lied - but I think lying is okay when you're doing it to stay alive. "Ahhh, but I need to go to Orange anyway" he continued "tell your friend to meet you there - we'll swing past mine and pick up my swag." He was on his third joint when I talked him out of it and now he wanted me to deliver a "package" he had taped under the car's carriage to a friend - I had to pose as his girlfriend while doing it...

I saw another car and asked him to pull over - he refused - he said that he had sworn to drive me to Armidale and that's where he would take me. He kept on asking me for this and that: his house - Orange - his other friend's house - lunch... eventually I caved and said "Okay I'll have lunch with you - but only if it's in Armidale town at a restaurant." At least that way I was guaranteed some safe passage - I relaxed a bit.

I've never been happier to arrive in a small town - especially because I was still alive! And there were people around - I was safe! We were down a back road where no one would recognise him - but there were still people about!!

Julz wandered off to get some beers and I scribbled a quick note on a napkin for a waitress - just in case there was trouble.

Julz took his time and I started wandering where he was- he wasn't at the bar... I checked the car - just in case he was rummaging through the bags he'd made me leave locked up inside. I checked the bathroom - nope. And then he emerged from nowhere drinks in hand.

Our food arrived as we sat discussing about his collection of Papua New Guinea Voodoo art. What a strange strange man. I sipped the beer twice - but even through his sunnies that he had yet to remove [even in a dingy restaurant] I could still see him eyeing my drink - it may have all been in my mind - but that drink tasted different... What if he slipped me a roofie?? I waited till half way through my meal when I 'accidentally' knocked my drink over.

"Let me just take you to Orange" he said one last time. "No!" I said - "I'll walk back to the highway from here". And the notified waitress watched intently as he finally let me unpack my bags. I felt like crying and throwing up at the same time I was that shook up. But I got straight back onto hitching immediately - I did not want him coming back again - he may have just been a very disturbed 58 year old man - but I've never been that uncomfortable before and psycho killers are apparently a common breed in Australia!

I watched him drive down the road and park. I stuck my thumb out like my life depended on it and a family pulled up. I jumped in shaking but smiled politely at 4 year old Tilly and Bonita and Desy. I was safe!  I glanced back once more and saw Julz driving off.

My new drivers had missioned through to Armidale for the horse races which had been been rained out so they were going to Tamworth for the afternoon instead. Tamworth was my day's target destination - it was perfect! - They even dropped me at the hostel and made sure I checked in okay!

In Tamworth I had cellphone reception for the first time in more than a week so I called through to Orange to find out the exact location of my new farm home- voicemail.

The next day I tried again - it just rang. And now the number's dead.

And this is where I sit - stuck in chicken farm land in the epicenter of nowhere where the Aussies don't speak english (I don't understand a word they say except "Keith Urban" (because he happened to play here last night) and the only foreigners are South Korean. I'm half way between Sydney and Brisbane and 555km from everywhere coastal and I don't have a clue what to do next... it's time to get on the road and ask the first car that pulls up "where to?" Let's hope they're normal....
at 7:32 AM No comments:

"Where to?" asked Karen, Australian hitch hikee the thirty second. I had yet to consult maps and formulate any plans, but it was time to leave the comforts of Coffs Harbour's real beds and canoes and surf and "west" felt right so that's what I said. "Come on then, I'm only going as far as Ballingen but." They all end their sentences with "but".

We reached Karen's turn-off and she looked at me and I looked back at her and then she looked back at me and I was still looking back at her and she said "I know where you need to be tonight" and she drove me an extra 5ish kilometers to the Ballingen Backpackers and told me "You can camp here tonight and then tomorrow you can decide what you want to do." I obeyed.
A week later I still find myself in Ballingen. Still at the hostel. Still registered as "one night camping." Still alive. This place is extraordinarily special - apart from Pai in Thailand and Granada in Spain - I can think of nowhere even vaguely similar!
Nobody in Ballingen wears shoes; that alone makes me want to stay forever - this place is magical! The fact that my tent stayed dry after five days of incessant torrential rain is a miracle and a half! A four year old told me that she saw a unicorn the other day - a white one - so today I cycled out to the Promised Land and explored Never Never Creek seeking them [with names like that I was almost certain I'd find unicorns] . Sadly I found only droppings  - but I know I was close.
Everybody in Ballingen is divorced or psychotic or disturbed or pregnant or all of the above - but it just seems to add to the appeal. Over breakfast this morning I chatted to several personas of one very disturbed Melbourner and a possum. The possum made some excellent points.
There's tubing and canoeing and hiking and the world's most spectacular views and biggest colony of flying foxes and plenty of fields to dance in and every local tells you about their most recent alien invasion ...but the real Bellingen is so much more...  With my camera broken (that's six broken in four years I think) and bed calling my name; all I can tell you is that it's a place you need to explore for yourself... You too may never leave...

The World by Toilets : Melbourne 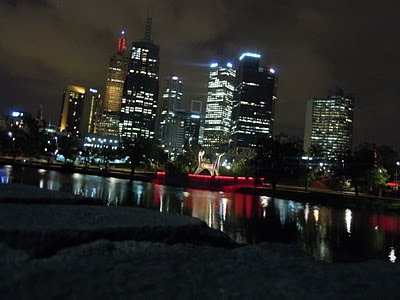 It may be unfair to judge a city purely by its toilets – but for some – with all the crap they have going on in them – the toilets really are just about the best thing they have!
Melbourne’s toilets alone were almost enough to get me to “settle down”, find a job and become a real person... almost... My first night out in the city led me to some remarkable findings: 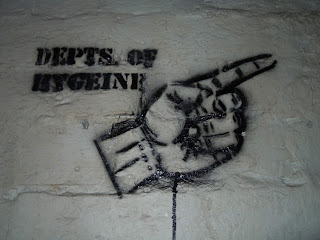 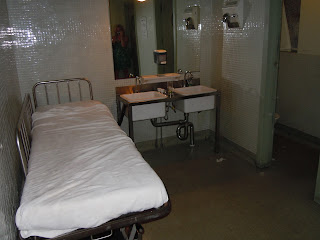 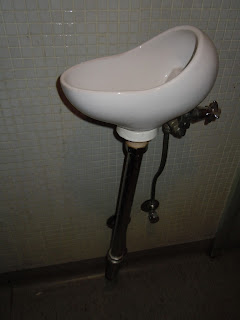 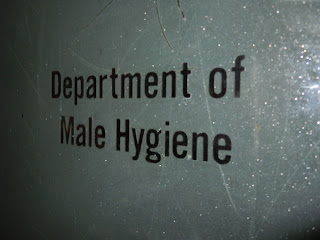 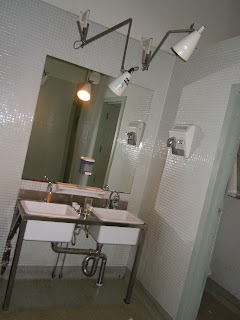 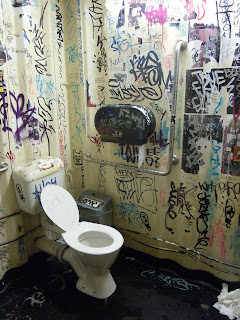 And if the artsy toilets weren't enough to sway me, the community syringe disposal units that even family friendly bathrooms possessed ensured that I knew it was an exciting city full of colourful people! 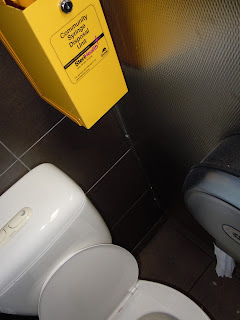 Combing the toilets with the architecture, the music scene, the nightlife, the buskers, the cafe's and the friendly hobos, I really can recommend a visit, a live, and definitely a wee or two... If I wasn't a full blown gypsy I might well be there still! The world is full of crappy cities - Melbourne is not one of them!
at 8:39 AM No comments: