The Power of Thumb

“May your child be born with a perforated anus…” yes, this is China [I’m pretty sure of it!] and even the profanities are arbitrary. And it’s confusing enough just traipsing through the country without throwing [the yet to be invented in these parts] hitch hiking into the equation – but if a life of bewilderment surrounds you, you may as well immerse yourself in it completely!

It was much harder to say goodbye to my little bicycle [Mao] than I’d anticipated; but it just felt right leaving him with an incredible South African family I met in Jing Hong (Yunnan). They’d had a fixed gear bike for the past 15 years and had just moved to the top of a hill… They needed it a lot more than I did! After days spent wandering, and absorbing the intricacies of the city; I finally decided what I’d be doing next and so, at 10-30 pm last Sunday, I wandered the jumbled streets and bought myself a brand new, bright orange backpack… I was all set for an early departure! 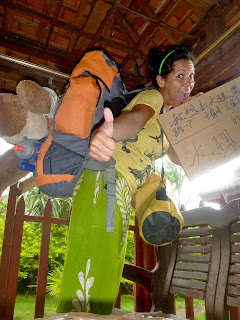 The transition to hitchhikeryness was not nearly as smooth as I’d imagined though. Hitch hiking literally does not exist in China! It took nearly an hour to explain [via google translate] to the poor receptionist at my hostel what I intended to do – but I walked away with a sign and a point in the right direction.

A bit further down the road my sign was added to and I was boarding a bus to the outskirts of the city. I must admit that it’s been a while since my last hitching and it took me some time to suss out the perfect spot and hand actions (the Asian ways are quite different to Western thumbing it). I held up my sign that said who knows what and proudly began the 2500+ km hitch to mum.

An hour in I’d created a few minor traffic jams and had caring civilians point me to the nearest bus station at least 5 times. The heavens opened up and I took shelter in a stranger’s garden. Another hour of failure bestowed itself upon me. It rained again. I questioned my mission. I looked longingly towards the bus terminal. I got a new sign.

And then some cyclists bought with them hope and smiles and while we conversed in Chinglish, a whole string of cars pulled up to find out what was going on… My luck was about to change. 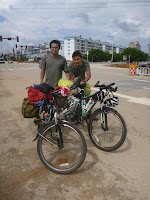 My second ride came from a bus driver who read my new sign and welcomed me aboard – for free. And then talked another bus driver into giving me another free ride. 162 km from Jing Hong, I called it a day and checked myself into a middle of nowhere hotel. 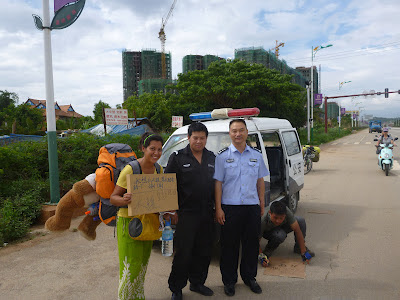 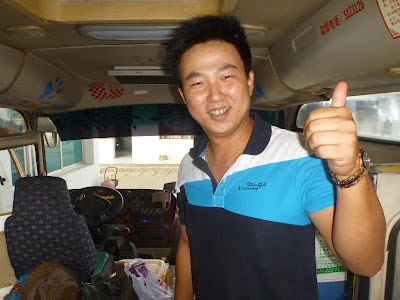 I got an earlier start on the Tuesday with an altered sign that read something about “Lincang” (a reasonable distance to cover in a day) and something about “Dali.” My new backpack broke as I walked out the hotel, but I’ve stitched the shoulder strap back on to the best of my ability, and I’m hoping for the best! I walked up a mountain back to the highway and prayed I’d have better luck than the previous day. I did.

Two business men pulled up in a brand new Audi and off we zoomed at speeds faster than many planes fly. The scenery got better by the turn in the mountainous roads and I clung on so tight my knuckles turned white – My heart was racing so fast that I could hardly eat when they treated me to an immaculate lunch. 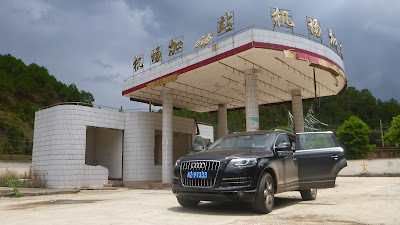 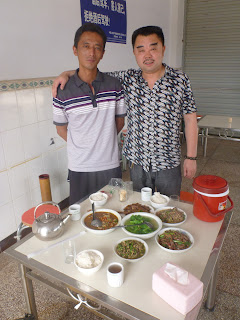 At Lincang they tried to drop me off – but I knew they were headed for Dali… it really is harder than it should be to try and explain your actual destination – but in retrospect, I should have seized the opportunity to find a safer ride, the worst of the MANY near death experiences were yet to come!

Dali was so incredible though that I’m not actually sure I survived the 562 km [In less than 5 hours] ride, I may have made it to Heaven: good food and quaint intricacies and an old town abuzz with wild music and the perfect amount of craziness! 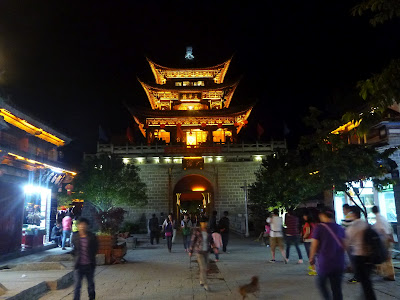 I lugged myself away from Dali two days later and lucked out again getting a ride all 234 Km to Li Jiang with two friendly twenty somethings in a VW Polo. Man I wish I spoke Mandarin… there’s so much I could be asking, but car charades is just so limited! 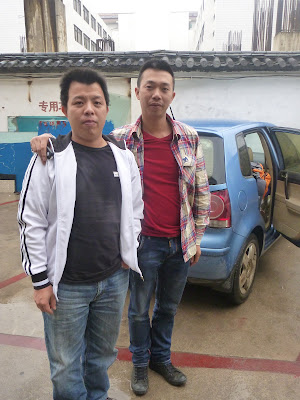 Li Jiang is a cultural experience you wouldn’t really expect to find in China. It’s constantly humming with millions of local tourists dressed in crazy clothing. People stumble from one ‘yak meat of the naxi sister’ shop to the next, stopping to buy pashminas and colourful leggings and an array of things one could never really use and then bar hopping between gangster rap and rock and acoustic sets and pole dancing and… well, it’s the kind of town you could get lost in for weeks. I spent three days doing just that – but mostly because I have no sense of orientation. 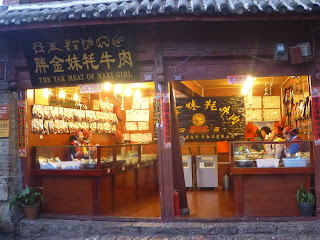 I left Li Jiang with a Mandarin-English dictionary and a shirt that reads “I don’t understand” (in Chinese) and because nobody understood me either, I ended up walking more than 12 km (stopping thrice to escape the torrential cloud breaks) to get out of town to an ideal hitch point. 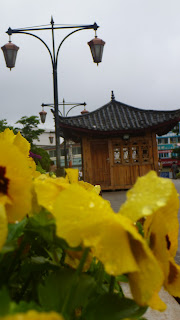 Finally a car pulled up – but a couple of km down the road I began to suspect something amiss. I fumbled for my dictionary and pointed to the word ‘taxi’ – my suspicions were confirmed and I found myself back on the side of the road. In the rain.

A few minutes later I’d met a lovely family who drove me twenty odd kilometers to the next intersection where three business men took me in and drove me to the Tiger Leaping Gorge. 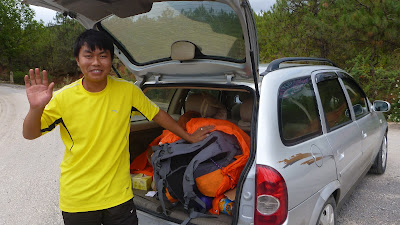 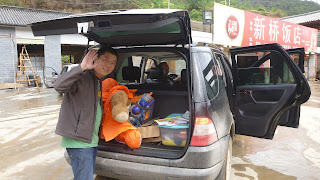 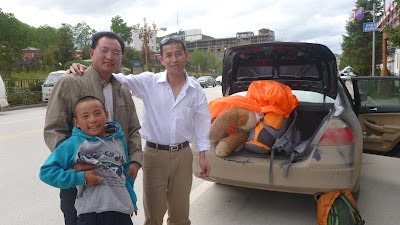 A final family drove me the last of the 204 Km to Shangri-la (or, as they say “Shan-go-li-la”) and the 7 year old besides me more than doubled my Mandarin abilities. I’m now able to speak the astounding total of at least 13 words… I’m practically fluent!

And that’s where I find myself right now, lost in a mountainous haven of spectaculousness and yaks. 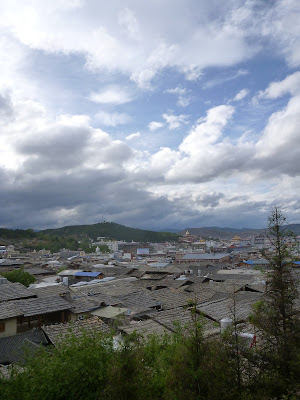 1084 Km later I have renewed faith in hitching – even if I’ve just discovered that I can supposedly go no further North. “Why?” I asked. “You don’t know? Something happened. We cannot speak of it.” That’s the answer I’ve had thrice… Looks like there may be some interesting border runs ahead of me… Sichuan Province, here I come!