Out of the Abyss : Still a Blip in a Vortex of Blue

Week 3 and still we hadn't caught up to the drowning sun. The heavens still had balls of fire to fling about. The ocean still held suicidal fish to die upon our decks. I suppose that's what happens when you average the incredible speed of 6 knots (tenish kilometers an hour). And then finally, we saw the southern cross and it felt like we were getting somewhere, almost.

We busied ourselves with reading and darkening (My skin's gone black[er], My hair's going ginger) and tried our hands at baking and sewing and carpentry and art and poetry: (Sorry to inflict this on you)


With Reunion alooming
I feel my heart glooming.
How will I stand
On dry stable solid land

For each item we break,
Something new Jim must Make
And whilst we sit alurk,
Kirk's always hard at work

Deaths aboard have been plenty
At this rate, soon the seas will be empty
For while flying fishes astound,
On deck it's only their corpses to be found.

But some day we'll arrive
And our challenge will be land to survive.


And then, in the early hours of day 24, I saw the lights... "Land ahoy". We were but a mere brick throw away... The winds died. The waves died. We sat bobbing motionlessly[ish] on the glassy waters. It took us a whole day to pass Mauritius.

We spent another whole day staring at the distant Reunion before we finally furled the sails and fired up the engines. Dolphins escorted us the final few miles and, finally, on Wednesday November 21st : 26 days (619 hours and 37 minutes) after licking land farewell, we finally stepped ashore on La Reunion, France: a blip on the map littering the Indian Ocean somewhere between Madagascar and Mauritius - technically in both Africa and Europe...


It's a massive shock to the system finally being on solid land again - you can put things down and they don't involuntarily move; you don't have to trod cautiously, constantly holding on with one hand, expecting to be flung in some arbitrary direction at any given moment - you can eat without having to hold onto the salt and pepper and your plate and chilly sauce and water and vegetables and chair....

Weirder still, after a year in Asia, is being back in the Western world, back the first world. You don't see whole families and their livestock on a single scooter, you don't have to use squat toilets, people don't yell out "hello mr, where you go?" or "masssaaaaage-a?" or "you want boom boom?? dr bob? you want to fly to the moon?" You don't have an endless mob following you around trying to sell you wooden frogs and chicken giblets.

The most amazingest yet is that in our little floating world there were no mutinies, there was no keel-hauling and no scurvy. Let's hope the next stretch, to Richard's Bay (South Africa - the homelands), is similarly epic!!!! 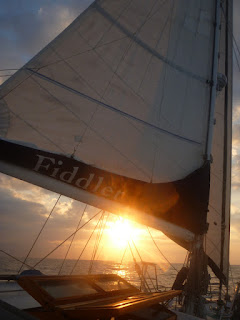