Happiness [and why you should laugh at those more miserabler] 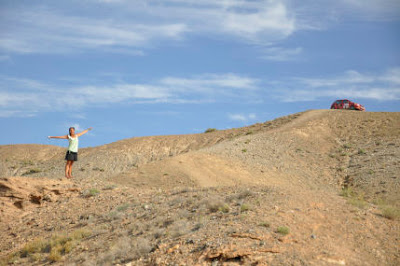 I always smile a little bit more when I see miserable people – they always remind me how ridiculous it is to not be happy.

I took a walk to the shops the other day and, seeing as there was still daylight, I took the short cut through the park (at night it converts into makeshift homeless housing and I don’t like to disturb meal times because I know they don’t get much protein in their diets). I stopped to watch the tiniest human running through clusters of pigeons. The birds would fluster a couple of feet up in the air making her vanish in a cloud of feathers and then settle down in circles around her again so that she  could do it again. And again. And again. Her laughter filled even the furtherest corners of the park.

At age 2, my first ever memory, was sitting in the nurse’s office at the Joburg Gen hospital waiting for my dad to finish surgery. The nurses all knew me well because I apparently used to cry if dad didn’t take me in to work with him. It’s a very bizarre memory because all I remember is kicking my legs back and forth and humming quietly and a smiley nurse handing me a lemon cream. I was the happiest kid south of the equator that day.

A few years later, at 8ish I think, after months of picking up rusty coins on sidewalks and saving tuck shop money and money that was probably meant to have been put in the offering basket at church, I remember calculating that I finally had enough money saved to go to Gold Reef City – South Africa’s best theme park (actually at that time I was pretty sure that I thought it to be the world’s best theme park).  My mother walked into my bedroom and told me she’d found the puppy she had promised me for my last birthday and that on the weekend we could go to the theme park with my two besties and collect my collie (who was to later to be known as Frisbee). I spent the better part of an hour jumping up and down in excitement. I didn’t have a care in the world.


There were all the joys that came with the gypsy life... And there was the inexplicable joy that came when, back in 2010, I accidently found myself sitting on a plane home after years of being away. And even more joy came as I touched down in Joburg and found my unsuspecting mother proudly waving around a sign that read “Marijuana” expecting my Romanian friend instead of myself.  We both cried and laughed at the same time while airport security kept a vigilant watch from nearby.

Last year in Vietnam I found myself alone, in the middle of nowhere in the pouring rain. Visibility was so bad that I couldn’t see anything and I’d almost had head on collisions with cars 3 times as I rode my trusty scooter down what would have been a picturesque mountain pass had the weather obliged. I stopped to have a quick break from uber concentration the road demanded and then my bike wouldn’t start. I shed a couple of tears – but the misery didn’t last very long because it suddenly dawned on me that I was in one of the most beautiful places in the world in a culture I knew nothing about with only a giant wet teddy bear for company and I burst out laughing because that is exactly where I wanted to be – that sort of adventure was more than most people even dream of. 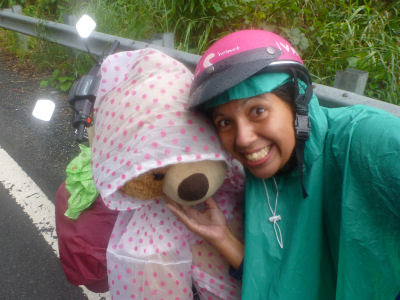 Similarly, after abandoning our self-constructed raft in Malaysia, after watching our hard work and many earthly belongings finding new homes in the depth of the ocean, as we swam for hours to try and reach the nearest shore – singing and laughing to distract ourselves from the harsh reality that our lives were actually in very real danger – Happiness hit me like a heard of frigid elephants: how many people get shipwrecked? How many people ever get to swim for their lives? And I was in good company too – if I was going to die (and I really really really didn’t want to), I couldn’t imagine a better way to go about it. 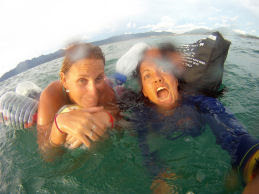 While I cycled the 20+ km uphill to work on Saturday I first got pinged by a horse carriage and then hit by a boat and again I burst out laughing. The ridiculousness of having to work weekends for the foreseeable future – of cycling ridiculous distances to a ridiculous job – and being clipped by ridiculous vehicles that shouldn’t be on the road in the first place made me look at life afresh again. There really is no point in being unhappy – ever! – There is ALWAYS something to smile about!

There’s no formula for happiness – it’s simply making the most of where you are while you’re there. And changing your perspective. You might be having a really bad day but if you look at it from a different angle you might find you are exactly where you want to be.
at 12:18 PM