Some days you close your eyes so tight and wish that you were somewhere else - somewhere far far and even further away... I've done a lot of that of late.

It's been a manic couple of months and with my passport nearing expiration and a friends wedding on Koh Samoi fast approaching, there were two reasons for fast tracking and heading back to Bangkok (for the seventh time) via public transport*.

*'Public transport' of course being rickety buses and tuk tuks and sungtaws and trains and that sort of thing... the kinds of vehicles most people see only in museums....  Please note how the word 'VIP' doesn't appear in any of those modes - similar to the word "shocks" and sometimes the word 'brakes' too is a foreign concept...

Anyway, whilst public transporting along I've thought long and hard about noble steeds of the yester years and the joys of having your own 'wheels'....


[cloudy dejavu like fade into the past......]
First there was Charlie. A 933cc Suzuki Alto that carried  us the 17 000 plus kilometers across 30ish countries and deserts and rivers and mountains from London to Ulanbataar... with only 21 flat tyres on the way, he was a beaut! 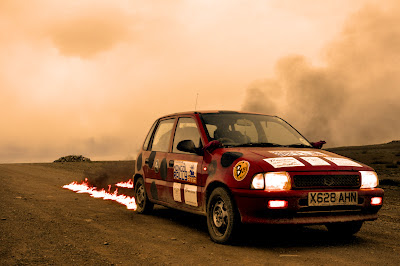 After leaving Charlie in the capable hands of the Christina Noble Children's Foundation and being abandoned by my brother and every other person I knew in Mongolia, I found myself walking the streets and somehow ended up with Margret Thatcher. My little Monglian stud that raced through the hills and valleys and caused my buttocks more agony than it could bear. That said, Margret (who turned out to be a boy) was not a very long addition to my life.
A couple of years later after mastering the art of hitch hiking (you should try it - just not in inland Australia http://barefootedgypsy.blogspot.com/2011/04/when-hitching-turns-bad-and-then-gets.html )
I happened to be walking down the street and bumped into a good Swedish friend. A few days later I inherited Karla  - the Mercedes Benz Camper Van of awesomeness! Karla housed billions of people as she traveled Australia picking up hitchers and strange animals and friends and was great accommodation for random nights out in town. It was sad to say goodbye as I pulled up in the airport and signed her over to a mutual friend [Nathan] just before I boarded my one way flight to Indonesia.

A couple of months of pottering around had me over public transport and with a good group of people about, we decided to build The Illegal Immigrant to sail from Malaysia to Thailand.

Sadly we misjudged the stretch in the rope, bought cheap wire and didn't take into account that there might actually be waves in the evening and our poor vessel shipwrecked and marooned us on a deserted island. 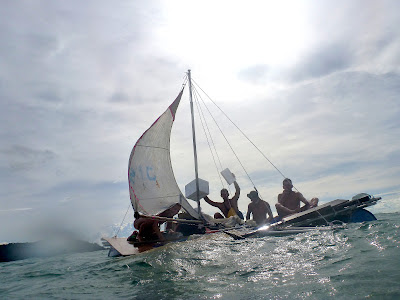 A fellow Immigrant survivor dragged me across Thailand and through Cambodia and after she returned to the icy lands of Europe I purchased Percy - a 97cc Sanda Boss (which is really just the fakest version of a Honda Dream)
On Percy I raced the length of Vietnam through villages and cow turd and mechanical faults and I'm still now trying to work out why exactly I sold my little bike... but I did... and that's how I ended up with Mao...

On Mao I crossed from Vietnam into Laos (a particularly hilly route) before speeding up a little to make Bangkok. He's still my little Chinese 'new design bike' but a random I met over dinner the other night is cycling him over to Thailand for me. Let's hope he makes it alive!


[Fancy fade back into modern time...........]
My passport application is in and my wedding is only 2 busses and a boat ride away [I think]. Two more days of hell... but hopefully that will be the end of public transportation for a long while... Apart from cycling to the Chinese border I'm not sure what's next... there's a world of endless opportunities, farm animals and vehicles out there for the taking... I guess i'll wait and see what life throws at me.