I might have mentioned before how much I hate busses. And I do. I despise them – but sometimes you have to suck it up, [wo]man up, board them and live the nightmare… sometimes.  This was one of those times.
With only 2 days to make a wedding, I could put off the long trip to Koh Samui no longer. I wondered over to my side of the road travel agent who spoke no English who led me to a random ATM and motioned for me to wait. Being an obedient traveller I did but it was a little bizarre lurking around a cash point. Others arrived in drips and drabs and within the hour the street was abuzz with ‘ferangs’ heading to Southern Thailand.
Two hours of lurking later the bus arrived and we set off on the 12 hour over night trip to Surithani where we were hearded like zebra into minivans heading in different directions. I happened to be sentenced to the wrong bus and after a friendly Thai woman intervened the driver said – “no problem, I first drive Phuket then take you Samui…” – these two places are on opposite sides of the country. The friendly woman intervened in Thai again and the, a minute of jabberish discourse later yelled “nobody give him money. Somebody call the police.” And there was a mild onset of panic . 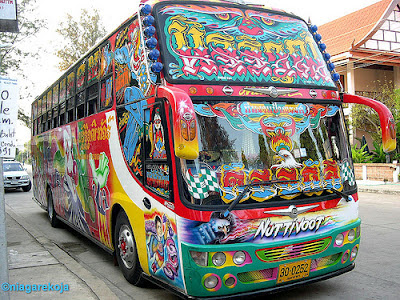 Twenty minutes later though the remnants of my bus were offloaded at a food stall and I enjoyed a private shofar ride to a ferry port where I enjoyed the finest instant coffee and a billon mosquito rapings. By 8am the rest of my VIP bus arrived, stuffed into the back of a tuktuk... somehow I always manage to be separated from the pack.
Instead of a boat, a bus arrived to drive us further off the beaten track to an actual ferry point from where we rehearded into boats and sent to islands near and far. By 2pm, 19+ hours after leaving Bangkok, I finally touched down in Bangkok. Another hour and a half later, I arrived at my budget hotel, checked in and B-lined the shower! 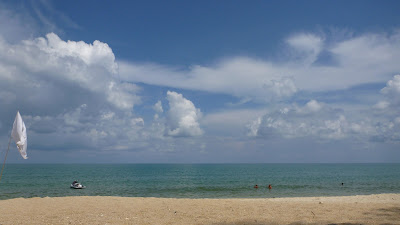 As I opened my bag I knew something was wrong… my toiletry bag was near empty was the first hint… my underwear was amiss… I poured the contents of my life onto my crooked double bed and began a sort… It was official – I’d been robbed.
You hear about I all the time – people’s luggage being rummaged through while you’re sleeping, but you never expect it to happen to you. I mean, in 4 and a half years of aimless world wonderings, my stuff has never been touched – EVER… now all of a sudden… I began the list of missing items:
My emergency cash fund – just in case my hand luggage was ‘borrowed’ – thankfully they left behind my second passport and my camera…
Earrings
The majority of my toiletry bag
My headlamp
My knife
Half of my first aid kit
My only good bra- My ONLY good bra. And this is when reality really sank in … the rest was all replaceable, but a decent bra in these parts is impossible to find… and how do you wear a travel bra to a wedding?? What kind of freak steals underwear anyway??
If I hated busses before, words cannot express my feelings towards them now… After 21 and a half hours of travel I’d been raped by bugs and mosquitoes, bizarrely robbed by strangers and with every other wedding guest flying to Koh Samui, I had been beaten by all on their 2 hour flight. But I was finally there and I had to put my miseries behind me – The celebrations were about to commence!