[*'Bisex' being 'Basix' mixed with 'Bike'.... not 'Bisexual' - I tell you this now in an attempt to not disappoint just in case that is what you were after]

It’s been a long time coming, but I can proudly say that Bangkok is officially behind me. About 350 km behind me. After 12 visits to the city (5 of them this year) I’ve finally moved on. Now it’s just me and the bike and the teddy bear and the [sometimes very big and busy and scary] wide-open road all the way to Chiang Mai!

After a morning spent hunting down the Dutch embassy I’ve been there 3 times already, I really should know how to get there by now) to pick up my brand spanking new 65 page diplomatic passport (HOOORAAH – no more worries of a full passport!!!) I was out of there… out of the stench and grime and misdemeanors that make Bangkok tick… Well, sort of out of there… admittantly I did a few accidental laps of the city first.

And I was doing pretty well too until I got a flat tyre… my 7th in a week. I was only 9km away from my destination so I decided to just pump it up and cycle like the wind but [and this is embarrassing], I couldn’t work out how to use my pump and for the first time I had no cycle buddies to help me out. About a kilometer walk down the road a motorcycle mechanic took pity on me, changed my tyre, mended a spare, and gave me 2 liters of water and then refused payment. I’d like to mention that this was the third time I’d been donated bottles of water today, not to mention the free energy drinks and coffee. Thai people are so lovely!!!

Cycling down the road my back tyre began deflating, but I was too ashamed to return and instead sucked it up and cycled with a flat. I arrived at about the same time as the moon…

Day 2: Learning to fix a tyre

Coming from the slums of Bangkok, Tony’s Guesthouse was a mecca of clean perfection so it wasn’t a massive ask to decide to stick around Ayuttaya for a day to learn how to fix a tyre and it only took 2 hours of frustration, but I now know how to remove, mend and reattach a wheel [I think] and that’s progress! 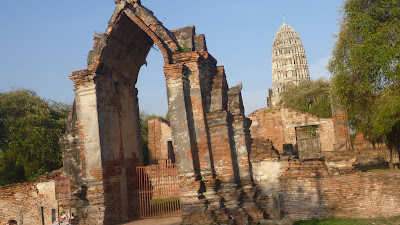 The ruins of the city are impressive too and an evening cycle to see the clusters of ancient temples at sunset is well recommended! 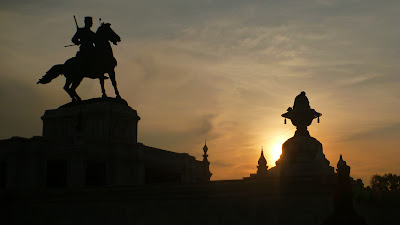 After reading three different cycle forums and reading how each got their first flat tyre on the way to Sing Buri, I decided to leave at dawn – one for them probably signified 15 for me (at least)… But alas, by 12 I’d cycled the 100 odd km puncture free and was unsure of what to do next.

After lunch, I escaped the heat of the day by googling hotels in the next 70 km and the interweb informed me they didn’t exist… Obviously I wanted to prove the internet wrong…

….I spent the night sleeping with a local family who tried to marry me off and force me to stay forever so I could be the village English teacher.

After a night of bed bugs and strange noises mossies, I hit the road exhausted and it’s hard enough to stay awake when the roads are straight and quiet and dull and flat so I’ve taken to counting things:

Rabid dogs who chase you and try and bite: too many
Trees that actually shade my side of the road: 6
Dead Snakes: 124
Living Snakes: None. They’ve all been killed
Military vehicles, carrying armed soldiers (big guns in hand) and tanks: 104 – It got to the point where I was expecting to cycle into a full fledged war zone. Wait, I haven’t read the news in a while, is Thailand a war zone??? 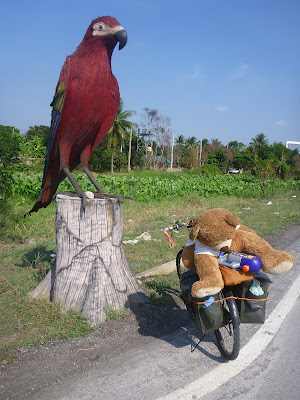 And now I’m here. I stopped in Nakhon Sawan because that’s where every other cyclist stops and I couldn’t handle breaking more hearts. I’m hiding in my hotel room because it’s hot outside and downstairs is packed with Thai business men trying to force [against my wishes of course] alcohol upon me and it’s the fifth time since I left South Africa the last time (507 days ago I think) that I have air con and I feel like I need to make the most of it.

I’m only 578 km away from Chiang Mai and haven’t a clue what the future holds. Tomorrow I travel onwards… Probably.