Faster than a Speeding Tractor

It's not ideal having both an empty passport and a bicycle.  The two just don't quite seem to match up.  I should be bouncing around the world mustering stamps and visas like my life depends on it (everyone judges you for having an empty passport and it's not pretty) - but I'm not - I've resorted to being the slowest thing on the road.

And that's why I'm still on my way to Chiang Mai... and at this rate I might be forever...

With all the niceities of aircon behind me, I sped away on my little Mao (Chinese tyrant bicycle) - it was 140 km to my destination and I was feeling hardcore. Despite it being my biggest day yet, I figured I could do all that and the 64 extra kilometers to Sukhothai...

I managed 70 km before taking a break at what I thought was a cafe'... Turns out it was a temple... and I was just in time for the morning prayers. But it was interesting chinging cokes with the monks afterwards - I just hope all the ceremonial things doesn't mean I've converted... I'm not ready to convert!

The coke fueled another 20 km before the heat melted me and sentenced me to looting around a petrol station for hours both smelling and looking like a hobo - Great way to have personal space and make friends with people you know don't care about appearances! 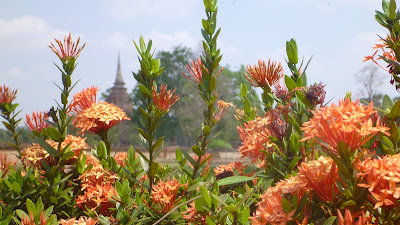 But the afternoon killed me. The road markers seemed to get further and further apart. The '40km' sign repeated itself 3 times over 5 kilometers - my butt ached something fierce, and the knee pain I'd been expecting finally arrived. It was hell.

Miracles happen though - I arrived. A motto taxi led me (for free) to an awesome $3 hotel, dinner was amazing and I even spoilt myself by investing in a large sprite. That's right - I went all out!

And then I crashed.

I slept so well that I overslept three hours and ended up riding in the middle of the day - not ideal - but I craved English so beadly (yes, this is how bad my English had become) that I didn't care. It was only 64 km anyway...

I pulled into a random street cafe' 25 km out to fuel up on liquids and met a German and Korean missionary who were busy holding a church service... Which was great, because even if I converted the previous day, I'd been reconverted today.

I'm proud to say that 10km out of Sukhothai I was officially not the slowest thing on the road, and I even slowed to take the picture... that's right - I'm faster than a speeding tractor!!! 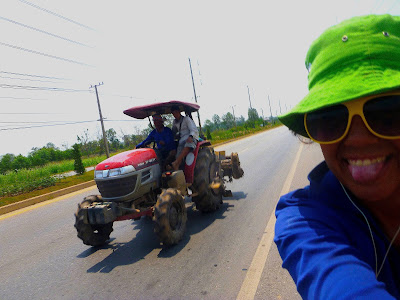 And Sukhothai is like heaven - it's as hot as hell but there are swimming pools and restaurants and beautiful gardens and crazy ruins and smiling people and even English and that's why I'm still here... lazing at the pool, banana honey smoothie in one hand, menu to order some delicious Thai food in the other. Life is good. [Maybe not so much for my masseuse from earlier who is still recovering after falling off the bed trying to click my back...but for everyone else] 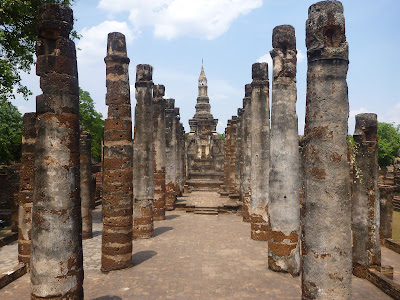 Even if travelling like a snail has it's downfalls [and mum offers to pay for busses/ cars or flights so I can come visit her in China faster], it's moments like this one that would only be half as good if I didn't earn them!