I was sweating water faster than I could drink it. It was one of those amazing phenomenas that showed me exactly why I had yet to see any other cyclists on the road!

It was officially the hottest day of the year with temperatures soaring over 40 degrees, but for some reason I'd woken up at 5 and talked myself onto my bicycle and left my Sukhothai haven... I had no idea what I was in for...

5 Kilometers out of town I saw my first accident of the day - a woman had riden her motorbike into a ditch... my third dead body of the ride... It always puts a damper on things knowing how fragile and short life is but it's a great way to remember to make the most of the time we have; still it's never a good way to start a morning - ever!

The terrain got dryer, the roads got worse and then turned to dirt. I saw my first live snake and had my first minor crash trying to escape an oncoming truck and hitting a pocket of sand. It was a rough morning that led me to a 3 hour lunch break in a town that sounds like saskatchewan, but I think that's in North America somewhere... and I'd cycled far, but not that far.

The afternoon bought with it yet another flat tyre and the first of the hills but that's okay because I had entered the province of Uttaradit and the sign board informed me that it was a 'Dream Land, Heaven on Earth' 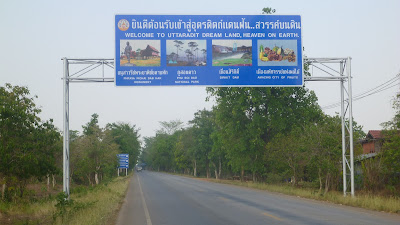 It wasn't quite what I expected Heaven to be like though...  I pictured a lot less sweat, dirt and stray puppies...

I was warned about the 150+ km stretch I had before me and when real cyclists say it's a tough cycle, you know you're going to die... I climbed onto my bike with dread, only to discover yet another flat tyre (ARRRRGGGGG!)

The first real hill after a country filled with so much flat was hell. And through the day, every hill I came to I swore I was going to ditch the bicycle forever until I was rewarded with the downhills. They almost [but not quite] made it all worthwhile.


I spent most of the day asking God nicely to change the terrain. He didn't.


By 2pm I was running on empty - I was half way up a massive hill running low on water and needing energy badly. For the first time in Thailand I found close on 30 km without any food stores (You normally can't go 50m without a 7/11) I was beginning to think that possibly I had died and gone the wrong way.

Wasting away I saw a sign pointing to a town called Long and in desperation I detoured in search of sustenance. I found a whole town full of smiley people who ran out to meet me and gave me water and fed me and desserted (as in gave me dessert) me and the guy below tried to marry me - he even borrowed a bike and tried to follow me out... and life was better again... 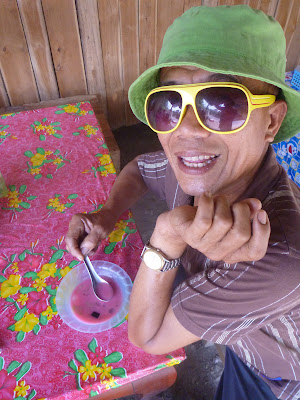 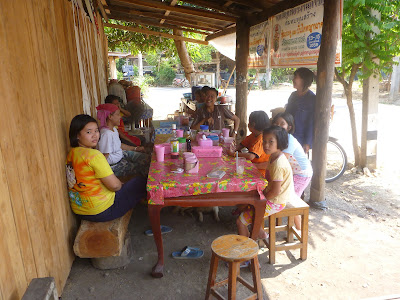 By 8pm I had reached the city limits and still had 17 km to go. I'd just broken my tail light while desperately cycling away from a pack of dogs uphill. There was no road shoulder, no street lights, no nothing and I was finished. It pained me inside, but I knew what i Had to do, I stuck out my head torch and flagged down any and every passing vehicle until one finally stopped.

The other 8 people in the back of the bakkie (ute/ pick-up) all squashed aside for my bike to be loaded on and I'd thought about letting air out of my tyre to make me look more like a helpless ferang, but there was no need... My bicycle had done it for me. 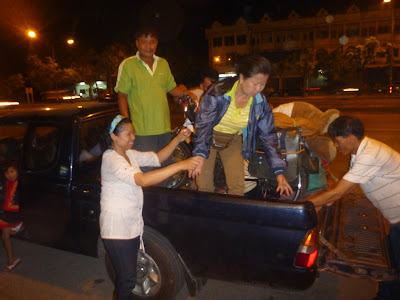 I don't know how I dragged myself out of bed, but I got straight onto my bike and started pedaling. The killometers were going down and three was something about that 100km mark that gave me the push I needed!

30 Km out I stopped to escape the heat and recharge on copious amounts of sugary beverages. I pushed myself down the winding roads and was rewarded with another sign 30 km later that said 'Chiang Mai 20' - but I was close. So close in fact that I even overshot and rode through Chiang Mai into the next town.

On my way back to the city the first rain of the season hit in a thunderous way and I was forced to take shelter at a friendly 7-11. Sadly it was 16-39pm and they only sell celebratory beers (or any beers for that matter) at 17h00 and as soon as 17h00 came so did the sun. And then Chiang Mai. And then a guesthouse...

And so surprisingly I find myself undead [but still very sweaty] - but I'm here. I'm in the process of getting clean laundry, I've applied for a Chinese visa and as soon as I find a toilet to wee I will have no more worries in the world!

I have no idea what exactly happens next, but for now life is flipping awesome and I'm just going to go wherever it takes me.
at 12:46 PM