Pirates, and we´re not even in the Carribean 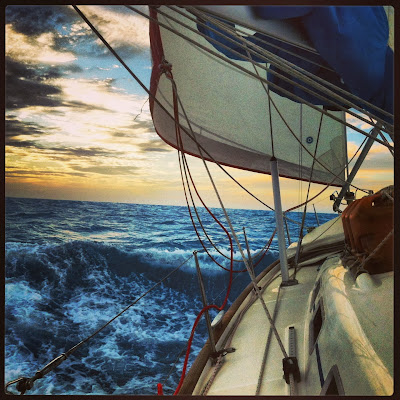 When I was little I always wanted to be a pirate and go around commandeering tea and cake... I wish all pirates were that cool...

So we (Three saffas, an Aussie, and the infamous bear) spent a whole month bobbing up and down in the Atlantic on our trusty vessel Nereid. We stopped only twice  to sample some local beer and stretch our lazy bodies and lick things... 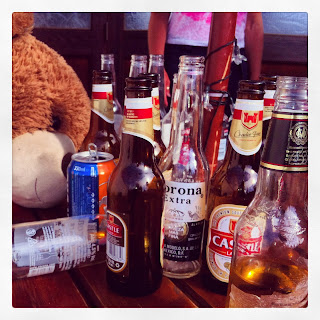 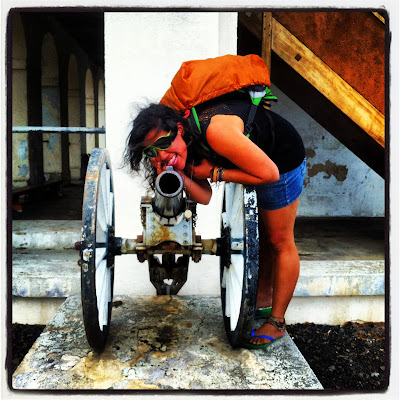 We sailed through Halloween and Diwali and birthdays (sorry if I missed yours) and who knows what else we missed out on in the real world, but the simplicity of life at sea is amazing in itself!

I finally became diligent and scheduled daily writing time into the not-so-strenuous life at sea. After all, I vowed that by the end of this trip I would have my first book! 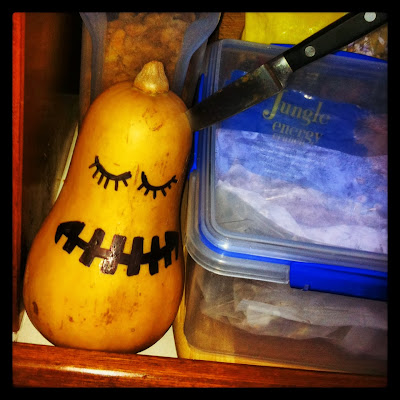 Temperatures remained freezing , and for weeks we saw nothing - no sunrise, no sunsets, no marine life, not even a ship until 4 weeks in when the dolphins swarmed to greet us and we found the sun and rainbows and stars and  the water colour turned deep purple and all you could do all day is be mesmerised! 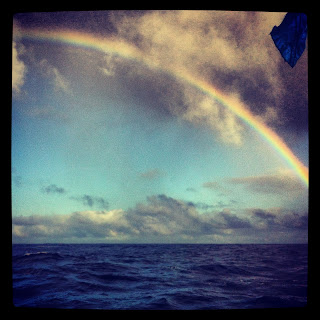 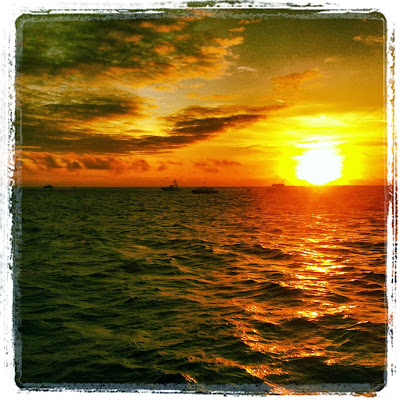 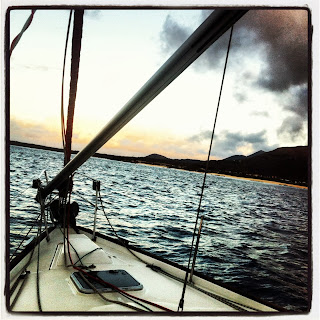 After 4 weeks of trying day in and day out, we finally caught our first fish (excluding the flying fish that suicided on our decks) - a whopper of a dorado!

And then finally we saw real land again - South America came into view - another ocean crossing - a new continent - a new country.

After 3 years of work, I finally finished my book and couldn't stop smiling - all I needed was to reformat it and pick up a few smidgens of info on some of the characters - but it was done!!

We watched the waters turn bright turquoise and a most phenomenal sunset before we tried to navigate the lights through to the Anchorage area that Port Control had instructed us to go to and eventually - 4455 miles, 620.25 hours of sailing later - we finally dropped anchor and cracked open our last 5 beers!

We feasted on fish and tuned into some Brazilian music and finally all collapsed - excited to be going ashore to lick the land in the morning.

Around about 1 am, I woke up with Di yelling  ¨what do you want from us?¨ - I thought I was dreaming, but then she screamed it again. Then there were Portuguese voices. I lay still trying to work out what was going on. ¨just put it down - take what you want ok¨ - said Simon.

There was scurrying about all over the  place and my heart started racing - what do I do??? I couldn't see into the salon and had no idea how many people were on board and what they were planning to do. I heard things being ripped apart and lugged across the deck. I heard Di and Simon trying to stay calm and eventually heard David's voice too.

I wanted so badly to be with the others - There is something about being with people that makes you feel a bit calmer - but they still hadn't seen me and maybe I could do something.... I prayed and prayed and prayed and mentally ran through everything in my cabin - what could I possibly use as a weapon?? Could I squeeze through the porthole and use the element of surprise?

Simon and David had been tied up with Di sitting between them. The four Brazilians had a spear gun and a knife and a revolver pointed at their heads. The pirates ripped their jewellery off and almost cut Di's finger off to get her wedding band. They went through cupboard after cupboard taking any and everything they liked - computers, phones, cameras, our sat nav, our GPS, our chart plotter, the outboard engine for our dingy...

I tried to work out how many of them there were - 2? 4? 29? I wished I could see what was going on!! Boat noise is so hard  to make out - especially in a fiberglass boat.

They opened the fridge and one took a big gulp of my soy milk before he spat it out all over the place - they opened up our biscuits and started feasting - they took with them a new wardrobe of David's clothes and made themselves quite at home. They apparently kept on picking Teddy up and putting him down again - as if they could not decide whether or not to take him with...

Finally they came into my room - they climbed onto my bed - their bodies moved right next to mine. I heard them opening cupboards and rummaging through stuff - I lay dead still. My heart pounding. I'd often joked about being deflowered by a pirate - but the reality of all of this was far too much to handle.

A light finally shone on me and they saw me there huddled in my usual corner. I stayed still. And they mumbled something and then shone it on me again. I felt the room go dark, I still felt the presence in the room - I still didn't move - I prayed and prayed and prayed. I was so sure that there was still someone on my bed. I heard the dingy start up and them start yelling and then more clambering. I had no idea if they had all gone or if they were just doing a drop off...

When I heard my crew talking again I took my first breath of the morning and came out to see what was going on. The boat was a wreck! I found the others on the couch and untied them. Everyone was very shaken, but nobody was injured.

They had ripped up most of our circuit board and disconnected our VHF so we had no way of contacting the outside world. Everything was gone - everything!!! They have the only recent copy of my novel and they even stole my tampons!

We think the pirates thought I was a kid with the bear and my nemo bag and my mask and snorkel and ... I seem to carry a lot of toys... But I suppose I owe Teddy one - if it wasn't for him, things might have been far worse for me!!

After sifting through the piles of garbage we left behind, we found the yacht keys and my iPhone (which was left on deck) and tried to make contact with shore.

It was just after 2 am - but none of us could sleep after that. We sat on the deck with a fire extinguisher and wrench handles and anything we could find for protection until morning broke - waiting prepared - just in case they came back.

In the morning (which took forever to arrive) we finally got through to the police and were moved to a private hotel marina where we should be 100% safe and then started the immigration process. What a welcome to South America!
I finally licked land hello and got my first Brazilian beer in an effort to make a bad day better! 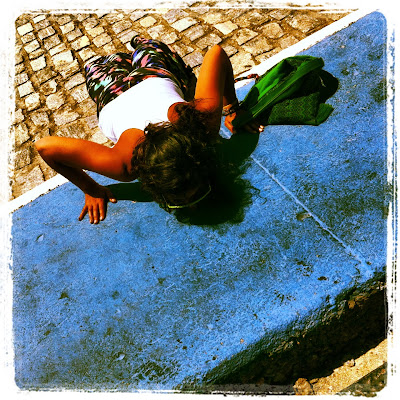 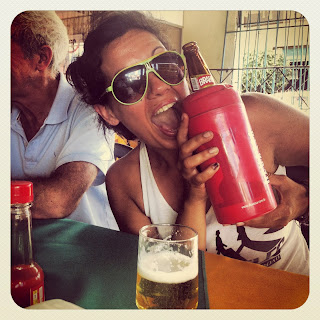 And here we sit - in Forteleza - trying desperately to get any navigation equipment, or charts, or anything so that we can sail onwards!

We are completely safe in our mooring, but we still do night watch because once your home has been evaded and your safe space been compromised, you cant sleep at night...

But the beer is cheap and the sun is shining and for the most part the Brazilians are a nice breed (its just amazing the things poverty will make people do) and well, things could always be worse...

I just thank God were all okay and hey, them pirates probably did the world a favour by stealing the novel that no one will ever read...

Bad things happen - but with each new day who knows what new GOOD surprises will come your way! 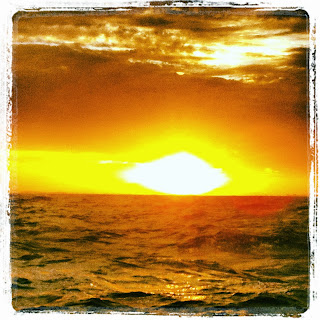