Survival of the Hitchhiker : 17 Rides to [R]adelaide

Ever wonder what sort of person picks hitchhikers up?? Ever wonder why they leave their passengers dilapidatedly dead in the dessert? Ever wonder if you could survive a hitchhike... if you had to??
I had no option. I had to hitch:
I had to be in Adelaide by Friday Feb Fourth. Yes, music festivals are important.
The train was full. The bus took too long.
Flying was not an option (principal not price).
I had no car. No bicycle. Only feet. Feet and two thumbs. 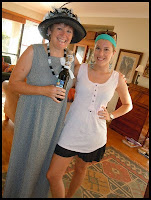 Sally Ball thought hitching a great idea as I sat in her sunny Bunbury-an house. She must be the only mother in the world who believes that hitching is potentially the best way to travel; even despite all the “Wolf Creek” nonsense everyone else had tried to deter me with. She and one of her loveliest daughters, Jess, even gave me my first ride [1] – all the way to the Albany highway - on their way to work. I won’t pretend I wasn’t a little petrified as I watched them drive away leaving me stranded with my “Towards Albany Please” cereal box sign. It was to be my first ever lonely hitch. 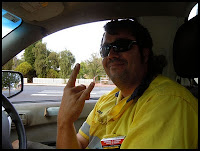 In only a few minutes I was on my way again with Voodoo [2] who was carrying with him radio-active material (he repeated this information twice). He’d agreed to take me to Kirup. I had no idea where that was but I was keen to get moving. He’d successfully lived on the dole for 6 years by completing his own rejection letters from imaginary companies – but eventually he became tired of skating his life away and got himself a real job (something to do with soil and of course “radio-active” material). 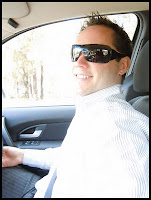 Not long afterwards Ollie [3] picked me up. It was quite a scenery change climbing in with the suited-up sales rep. He was on his way to the Chain Saw shop in Manjimup. Obviously images from the Texas Chain Saw Massacre flooded my brain... 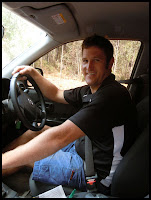 Codie [4] took me as far as the turn off to Northcliffe which was literally a “nowhere” 45 minutes down the road. It began to rain. 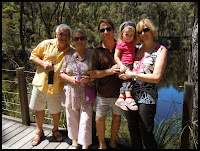 There was no traffic at the turn-off to Northcliffe. At least I was getting a bit of a shower. By chance a car drove out from the campsite down the road. They waved, shrugged a “we’re full” and disappeared. And then they came back. “We forgot we have a fold up chair in the back” said Steve “...couldn’t leave a girl stranded on the side of the road. Especially not in the rain.” Alli (aged 3 and a half was so intrigued by Dora the Explorer that she didn’t realise I’d climbed on board and the Grandparents were just glad to see that the years of hitchkiking were not dead and buried. And that’s how I joined a family holiday [5] and got to see Fenbrooke Falls and climb Mt Franklin. 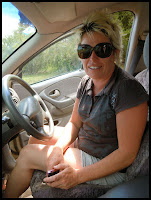 From Warpole I hopped in with Tina [6] a mother of three on her way to see the principal at her daughter’s school in Denmark (The town, not the country). 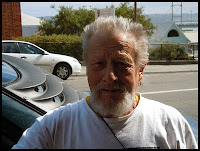 Seconds later John [7] pulled up. The 73 year old’s mullet suggested he may have been a psycho killer – but the 2 toddlers in the back seat seemed to suggest that he was more the human trafficking kind. I was okay with that. John had just left his 24 year old [third] wife in Thailand and was obviously living out of the car whilst getting settled back into “the real world.” I’m unsure if he remembered that the tarred road was where most of the driving was meant to occur – but fortunately the road shoulder didn’t kill us. He gave me a tour of Albany before taking me to an Albanian hostel where they give you free luminous green cake and breaky. 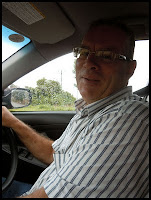 Saturday greeted me with rain – lots of it. Fortunately I stopped to ask the direction to the highway because Ron [8] offered me a ride out of town – it was a good 8km... 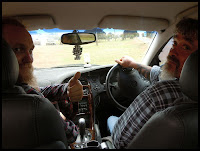 As I prepared my “Towards Esperance” sign a car pulled up. I should have noticed the alcohol straight away and probably should have waved them off – but I hopped in with Marti and Chook [9] who had just finished an all-nighter and were still drinking. They took me as far as the fork in the highway and offered me a cash “job”... I opted out and walked a bit for obvious reasons. 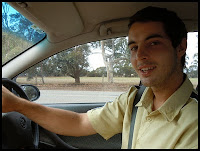 Spencer [10], a uni student, was on his way to his parents farm and dropped me off at Manypeaks where I did not see many peaks or rides or anything much. Several local famers pulled in for a friendly chat – but rides were looking scarce. 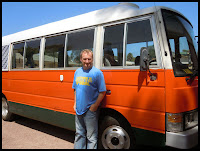 Some boys pulled in to ask directions to a campsite. They returned 20 minutes later to tell me they’d given up finding it and may as well just go all the way to Esperance – now to find some space in their car... While they rearranged an insane amount of luggage, a bus pulled in and Ian and his son Lachlin [11] smiled kindly and said “Esperance? Why not?” So I waved the other boys farewell and clambered aboard. The 6 hour drive flew past as the Scotsman told me life tales of his 18 years in Australia and the future rock star son (look out for “Sympathy for Tiffany”) discussed music. And if the ride wasn’t enough – they let me crash in their school bus for the night and proceeded to feed me bacon and eggs in the morning. I think I may well be God’s favourite! 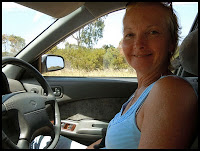 Ian's good friend Sussie [12] who had the most charming smile and incredible life story gave me the loveliest tour of the picturesque town on Sunday before driving me to the Norseman road and giving me the massivest hug goodbye. I needed the hug! 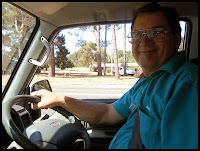 The whole of the Esperance golf course looked on and laughed as I patiently thumbed on the side of the road. Derrek [13] pulled up. When he found out I was headed for Adelaide he made it very clear that under no circumstances was I to attempt to walk across the Nullarbour. I laughed – but he was serious. He didn’t let me out of the car until he was certain I understood that trying to walk the 2000 odd km desert would be foolish. 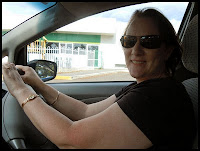 I grabbed an ice-coffee in Gibson as I waited for the next ride. It was a long wait. Paula[14] was on her weekly Kalgoolie commute and made excellent conversation about breast cancer survival and kids and marriage and forensics all the way to the turn-off to Adelaide. Another hug.
I started off by talking to the truckies. They were all headed for Perth. Apparently they all run on the same schedule – but they offered to pick me up on Wednesday if I was still around. With the flies and the heat and the dust I could imagine nothing worse than being in Norseman till Wednesday. A massive storm hit. I ran for the pub. Trash cans flew around and the wind whipped whirlwinds of dust all over the place. The power went out. 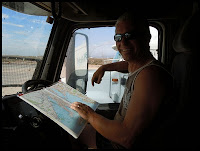 My heart sank as the cashier told me that the last hitcher had been stuck there for 5 days before he got a ride. But I decided to stay positive. The storm died down, but daylight was fast disappearing. One more try for today I figured. I walked up to the “Wright” truck pretty sure that this would not be the “right” one. Jason [15] said he could take me as far as Port Augasta. I said that was awesome – although once again I had no idea where that was - I started celebrating when I found out that that was only 302 km from Adelaide.
A word on long distance truck riding. Choose carefully! Even if you have limited options! Hitching in Aus is nothing like Africa – there is only one passenger seat and health and safety prohibits the 1678 other passangers you would find cramped on the truck bunk in any other country. In fact, many of the trucks only come with one bed. You don’t want to have to share that bed with the truckie... Again my luck was impeccable – not only did I get a really wonderful, kind hearted trucker, but I got a whole container to spread myself in and make my bed which was amazing because the 54 degree temperatures the next day bought stretched our trip over two nights. 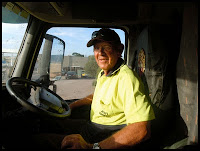 I almost blew away as I tried to hold my now crumply cardboard on the side of the road in Port Augusta on Tuesday. I knew that someone would pull up eventually and thankfully Dennis [16] did. His only concession was that we needed to stop and feed his pets on the way. What he didn’t tell me was that his pets included a herd of cattle, a horse, 100 birds that he was breeding, 3 dogs and an iguana. He gave me the tour of his property and showed me his family pictures. He grinned massively as he told me all about his favourite grandchild –Spork. What a lovely man – at 70 he was still trucking every day and single-handedly running a farm at the same time.
My phone had committed suicide a few days prior and all my numbers had been lost. But luckily enough I had typed out a “to visit” list for Australian immigration just in case they didn’t want to let me in. I found the number and sent the text from Dennis’s phone. “Adeena will be at the Gold Fields Highway and Port Wavely Road pub in 25.” I willed really hard for it to send. It was nearly 11pm. 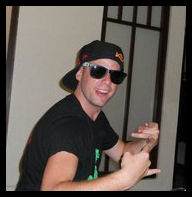 And that’s where Dennis sat and very courteously waited with me for my final ride. My final sign was scribbled just in case – Adelaide couldn’t possibly have a population of much more than 20. But low and behold Shane [17] arrived and drove me to the Homette.
And that’s how I made it across the 3116 km from Bunbury to Adelaide where tomorrow’s music festival better be worth it. Oh, and if you’re waiting to hear more about desert murderings, thievery and sellings into slavery; I’m sorry to disappoint... those days may well be over.
at 7:26 AM