A one way ticket to Bloemfontein. Yes, I know what you're thinking...
But it was good stuffing my measly supply of gypsy essentials into my pack again.
It felt right stepping out of the front door and taking the hike down the road to the bus station.
Good Friday is as "good" a day as any for thirteen and a half hour bus journeys.
Adventure beckoned and once more I needed to heed it's call! 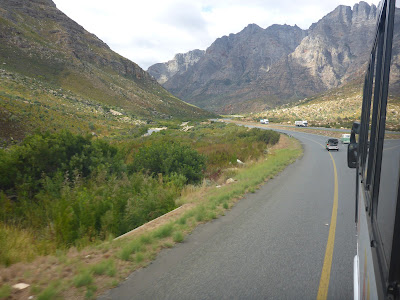 You're probably wondering what adventures could possibly lie in Bloemfontein?
But did you know that they have a 24 hour disco bar at the tourism office?
Did you know that Leon Schuster was born there?
And did you know that Lesotho is only a brick throw (two[ish] hours) away from the bustling  Town?
I had [sort of plans] plans.
I had [kind of] a mission.
I had a crazy adventure into unknown worlds ahead of me.
And then my mother phoned from China and reminded me that Easter was about family.
[And Jesus also of course].
So there I sat in Bloemfontein at 2am with the big questions ploddering about in my head:
Why do they have a 24 hour hour bar disco at the tourism office which also doubles as the bus station?
Why was Leon Schuster born?
But mostly I was wondering where to from here??!?
I'd planned to try and spend some time exploring Lesotho and maybe even venture into Swaziland before eventually heading to Johannesburg to surprise my granny for her birthday.
But the family would all be celebrating both her birth and that of my cousins over Easter dinner...
I did what any of you might do in my situation.
I jumped into a taxi to catch a bus to the border.
My brand new South African passport needed some stamps.
I needed a cultural experience.
I followed a friendly lady into a share taxi and explored the markets of Maseru before I clambered onto a bus to the next major town.
The conductor forced us deeper in to merge with the back of the already over-crowded bus.
A human mosaic of colourful blankets and vivid emotions.
I eyed the rolling hills and tiny villages and building supply shops as more people were added to our human mangle.
Mountains. Goats. Potholes. Puddles. Smiling faces.
A few hours later we stopped.
Lunch.
Maluti.
And then I walked to the border and cleared out.
The police pointed me in the right direction, but I was only the third person looking for a minibus taxi to Johannesburg that day and if I was lucky we'd leave before dark.
I walked down the road and started hitching.
I felt bad about hitching after mum had sworn me never to do it in South Africa.
But if mum wanted me to be with family at Easter, there was no other way.
I got a ride to Senegal.
But before you get too excited, it's actually spelled "Senekal" and that place is is not all that exotic.
From there I got a very entertaining education on the South Africa I did not know as we bounced along a potholed road to Vereeniging (not all that exciting a spot either).
I tried to make friends on the minibus taxi to Jo'burg but nobody paid me any attention.
I wanted to know where exactly we were going?
I wanted to know there was a way out of downtown Johannesburg in the dark.
I wanted to know I'd be safe.
But 'safe' became a distant notion.
Monica turned around and whispered to me that she would help me, but it was not safe to talk to people on taxis. The man next to me agreed and told me how the gangs of Jo'burg now operate.
A man at the back told me never to question anybody anything, because then you owe them.
You walk like you know where you are going, even if you do not have a clue.
At almost every corner are touts who want your money, your luggage, and [of late] your dignity.
And then the whole taxi got involved with helping me make a plan to get to my granny.
As we stepped off the taxi I had a whole load of new friends, but I was not allowed to talk to them.
Looking more touristy than ever
[With my backpack and rainbow gypsy pants]
I was to follow them a few blocks to another taxi rank
but pretend like I did not know them.
Their helping me would get them into all sorts of trouble.
This was one ride for me, but a regular commute for them.
I was not allowed to greet anyone.
I was to stare straight ahead and walk with purpose.
They nodded to the Alexandra taxi and I climbed on.
"Balfour please" I called to the driver.
"I'll hold your bag" said the friendly man next to me.
I declined.
"Do you know the area?" he asked later.
"Yes." I replied, feeling bad for being short.
When we passed Balfour Park, I asked my friendly neighbour if I was remembering it right.
"Yes." He replied and then demanded five rand for the information.
I laughed, asked the driver to stop at the next convenience store and called Ouma.
And then there was family.
And [stinky-two-day-travelling] hugs.
And then a shower.
And then less stinky hugs.
There was an Easter egg hunt.
And church.
And more [even cleaner] hugs.
And laughing. And celebrations. And a feast. 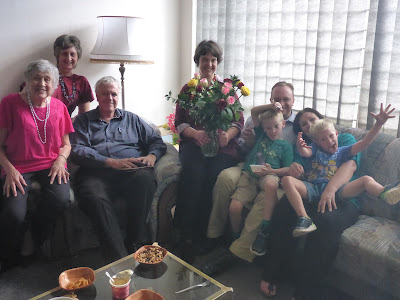 Mum was right.
Family is the best way to Easter.
But Swaziland for Supper?
Thursday?
Who's coming with me?
at 3:50 PM No comments: 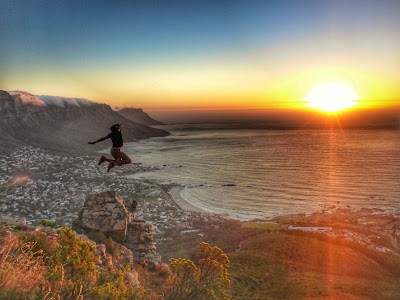