HANOI: It's always good to not be Dead.


It really is good to not be dead. I'm grateful for every minute of undeadliness and hope to maintain it for quite some time to come.Years even.

2254 km of epicness from Saigon, I've arrived in Hanoi. And despite the four flat tyres, the snapped swing arm, the dismantled chain guard, the destroyance of my shocks, the driving straight through a road block, the death of my battery and my spark plugs and my hooter, the getting pinned under my bike twice - once in the middle of the Ho Chi Minh highway - and the incessant rain, I've loved every second of it - every single second!!! I still can't actually believe it's over. I made it to Hanoi. Percy made it to Hanoi!

Driving with a gang has been amazing too. Coming down the Hai Van Pass brought saw the most spectacular sunset of my life and having people to share the incredibleness with was a must. As were the thousands of jaggered cliffs that littered the vast green grey terrain.

Every time we stopped to ask directions or recount near death experiences with cows and busses; school kids would flock to admire our dirty bikes, whiter skins, and Teddy 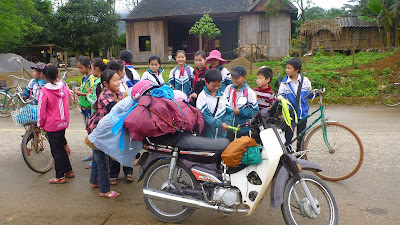 The final 15 km were the hardest of the trip. The roadworks had busses and trucks and bulldozers and livestock merged on a single lane pot-holed track where more motorbikes than there are cockroaches in Africa raced to random destinations carrying their families and fridges and goats. Only 5 km out of town I lost the gang and spent a couple of hours searching the old city for our preascertained finish line. But at 17-54 on a Sunday, with only 6 minutes to spare on happy hour beer, I pulled into Hanoi and parked my Percy alive - an accomplishment I still can't fathom!

Two days ago I sold my beloved scooter to Ian, the tallest Australian I've met in a while and he's just began the racing to Saigon to make a flight. I do hope Percy treats him nicely!

All I have left now are a few cuts, burns, scars and bruises as memories.


It's hard to believe that despite the stampedes of cows and cars and busses that have run at me I'm still alive  - I must have cheated death more times in Vietnam than any other country I've visited before. And it's not over yet either - I still need to flee the country - I'm not sure where to go from here - but it still won't be onto a bus... life's too short for busses!!!
at 12:09 PM