Monks are chasing you with guns, toddlers are plastering you with toxic chemicals, around every corner lies a vicious terrorist just waiting to attack. There's nowhere safe... nobody you can trust - it's just you and at least a million of them. 72 hours of 'kill or be killed'. This is the year 2555. This is your future. 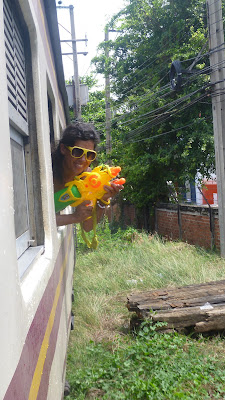 Our train arrived 4 hours late, so instead of sneaking into Bangkok in the wee hours of the morning, we arrived in the thick of it. The thick of Songkran. Whilst most of the world celebrates New Years with fire works and singing; all of Thailand shuts down for a 3 day long water fight that spans streets, alleys, even hotels and bathrooms and restaurants! It's ruthless too - they don't care if you're unarmed, or carrying electronics, or a giant teddy bear... actually the more you look like you don't want to be wet, the more troops swarm in to attack making my newest cycle buddy, Katie, and I prime targets as we cycled the 4km from the station to our dodgy brothylish hotel.

But checked in, guns loaded, we headed back to the streets armed with less than ideal weapons and were greeted by a gang of thai alcoholics who welcomed us with shots of who knows what, bucket loads of ice water and talcum powdered substances that are allegedly toxic (according to the Bangkok post). In search of new victims , we rounded the corner to Khao San road where we were hit by a wall of people. It's almost impossible to move as millions of people dance to the best of Thailands's hip hop and djs and foam floats around you while water falls from the skies and the ground and everywhere. 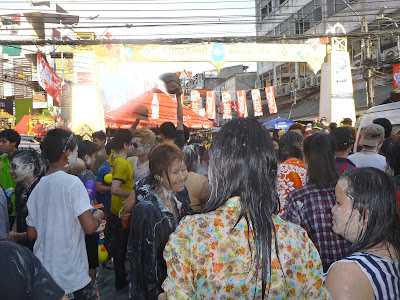 And as the sun fades away, the streets get bussier and the water gets icier and the celebrations get hardcorer and the lady boys come out to play. Mentalness, That's all I can say. Mentalness! And this mentalness increases by the day - maybe even the hour! 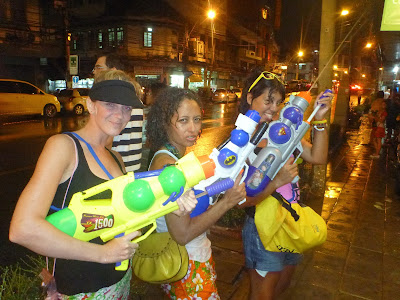 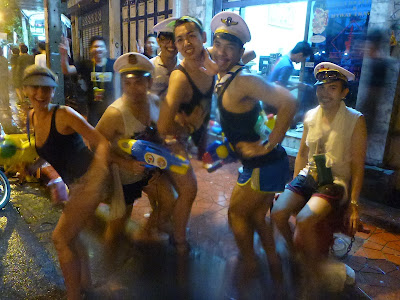 After slipping for the umteenth time and breaking my toy gun, I invested in some hardcore artillery and spent day three seeking down those who'd targeted me before... it's so much better with a real gun... and even better when you've accumulated an army of Thai freedom fighters who supply only you with the iciest water. 18 hours of solid revenge! I was unstoppable... except to sleep eventually, because even the hardcorest super heroes have to do that sometimes!

Three days of hitting it hard had Bangkok quieter than I'd ever imagined possible come Monday morning - and apart from the remnants of talcum powder that plastered vehicles and dripped from sky scrapers, it was the cleanest too... maybe they need the three day wash down every year?

Anyway it's now the year 2555 in Thailand and time for fresh starts... it's time for me to rekindle my hatred for my bicycle. Next stop Chiang Mai... 850ish km... and this time it's just me and the Teddy Bear.... 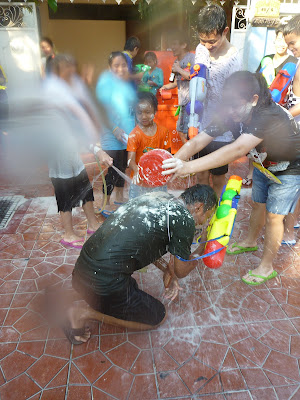