Is this China? – Tales of a Mekong Stowaway

Bang Bang Bang! Bang Bang Bang! [there was definite urgency in the bangage]. I flung the door open in my PJs to find an exasperated Mike standing there: “Let’s go!” “What? Where?...” I jumped in his car with disgraceful hair and disgracefuller morning breath and sped off to immigration.

I knew there was a chance I’d be hoping on a boat sometime on Monday, possibly… but it was meant to be afternoonly and the reality of all the maybes made me half suspect it would never happen… But there I was at 8am, stamped out of Thailand with about half an hour to make it to the port to board some sort of boat that would allegedly take me to somewhere in China for a yet to be discussed cost… There was no turning back now!

I threw my belongings into my saddle bags, did a facebook update so people could know where my bodily remains could be located [if it came to that], got on my bike and pedaled like the wind [on a particularly breezy day]. 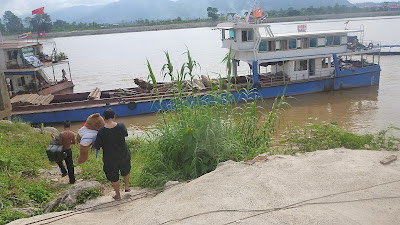 I made three wrong stops on route, but there before me lay my glorious timber boat – Fengshun 3. Mike and May-ee, who I’d met on Saturday while trying to organize the non-existent, allegedly impossible vessel, met me onboard. Mike speaks some English and Thai, May-ee speaks Thai and Mandarin and the crew speak ONLY Mandarin… Through the various interpretation channels my 800 yuan ($125) fee was negotiated, and the rules were laid down:
1)   Under no circumstances am I allowed to go to the front, the roof, or the captains sector of the ship.
2)   If they point to my room, I need to go there as quickly as possible and close the curtains.
3)   I am not allowed to disembark in Laos or Myanmar

And that was it – not a lot of rules considering it’s currently illegal to take passengers up the Mekong and that my mere presence onboard made them far more likely to be targeted by Mekong pirates, of which there have been a lot lately!
I bid my translation duo farewell and settled into life as a semi-stowaway. There was no need to have hurried though – it took hours before we eventually departed. 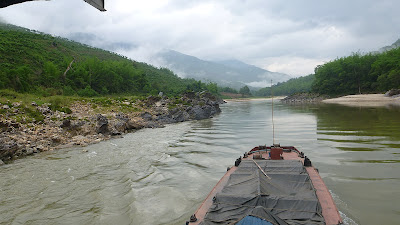 With the Golden Triangle drifting further and further away, the scenery became increasingly awe-spaculous! I met the crew in bits and pieces, but with only charades to communicate with I couldn’t even get their names. 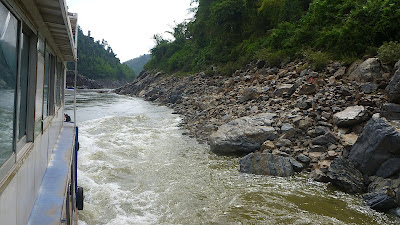 Meal times bought with them table-fulls of delicious foods and plenty awkward conversation [I assume] about the stranger in their midst! At dinner I was overloaded with rice wine (I think) as they “Gambei-ed” me in rounds trying to out drink me. They did. I was honoured to share a room with the cook – she won the love and appreciation of both my heart and my stomach! 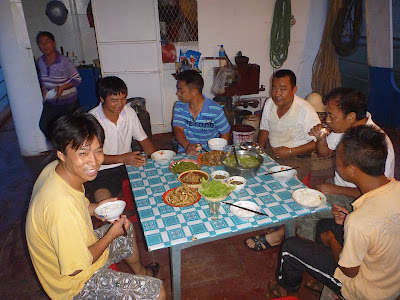 The rest of the 7-person crew included one man manning the wheel, 2 men who sat at the front of the boat with bamboo sticks to check the depth of the water, one man in the boiler room, one man keeping watch, and at any given time - for no apparent reason - there was always one person doing laundry. Geraldine was the only one who had any time to spare, so I spent a lot of time babbling to her – but I tried not to get too attached, I feared she too may be joining the dinner table soon!

Monday evening had me chased to my room for the first time where I sat for a couple of hours with the curtains drawn shut while the world went by outside, Tuesday morning again. On Tuesday afternoon, after I’d finished washing my bike (yup – I had to at least pretend to look busy), we had military board our ship with guns… but the excitement was short lived and they too departed. 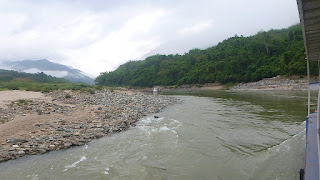 Being the dry season and heading up stream is no easy task. Every time we hit rapids or a sand bank (which was quite frequently), 2 of the crew would swim to shore with ropes and tie us to the closest country where an intricate uber pulley rig would slowly lug us forward to easier waters. The crew didn’t mess around.

The engines fired up by 5-30 am each morning, and we docked at the very last light – around 8pm. By 10pm (latest), the generators were off and a world of moonless darkness with no light anywhere engulfed us. The others, having worked a 14.5 hour day would all drift straight to sleep, I would lie awake feeling the bugs crawl on me and having a few unwarranted reunions with ‘the rat’.

I’d heard that the trip could take anything from 2 days to a week, so from the second afternoon, any time I saw any sign of civilization my heart would start beating – “is that China?” – I lost track of how many times I asked that question– it sucks to not know, not that it would have made much of a difference I suppose, but I had to ration my coffee and… 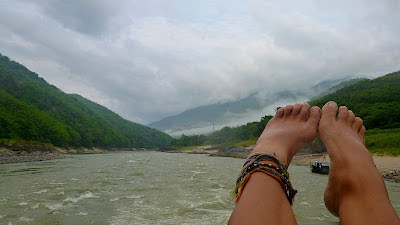 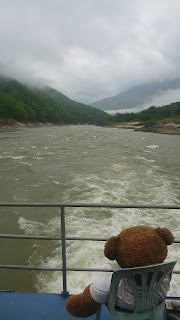 Eventually, by afternoon the third, we definitely crossed into Chinese waters – there was no mistaking the flashing lights and massive “Border police” sign. I packed up all my belongings in anticipation, but it would still be hours before we reached the port.

I climbed down the stairs to find Geraldine tied up and stick man number 2 holding her by the neck with something shiny in his hands. I went straight upstairs – I couldn’t watch – she’d come so close to surviving…  Minutes later I watched her be placed on the roof, along with her cage – stick man motioned a “shhhh!” to me and I breathed a massive sigh of relief and broke into smiledom!

When we eventually did arrive, border control were very surprised to find me there and, after they excessively searched some of my luggage, I touched dry land for the first time in three days. Because all the forms were in Chinese, it took me 5 attempts to fill in my immigration card, but apart from that it was problem free. Far too easy even.

I had arrived in China unmurdered, un-shot-at and unrobed; and my little Chinese bicycle [and probably most of the other belongings] was home! 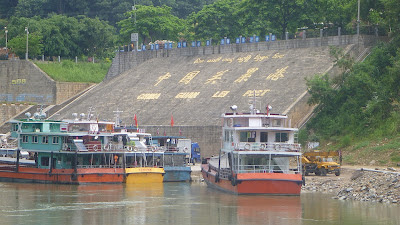