The Power of Thumb – It’s Contagious! 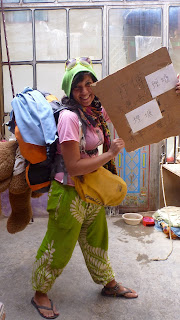 7 of us ended hitching out of Shangri-la last Monday. 2 were headed South, and the rest of us North. I was quite looking forward to some good company. But it was only when I was checking out that I consulted a map and found out that my planned route cut straight through the Tibetan Autonomous Region. Foreign tourists can’t enter the Tibetan Autonomous Region at present – unless of course you have a guide and a permit and, as of two weeks ago, 4 other people from the same country. It’s harder than you may think finding 5 South Africans or Dutch (because I’m apparently also Dutch) people in China, let alone ones who plan to go to Tibet…

So although the streets were littered with hitchers, it was another lonely walk for me while the Chinese tourists roamed free… and the road to Litang had me off the highway heading down the dirtiest road yet.

There was a lot going through my mind as local construction trucks sprayed mud all over me and Teddy. Litang was still apparently out of bounds for us touristy types. Rumour has it that two monks had burned themselves and over 600 people had been arrested there just a few days earlier. I walked onwards half fearing that I’d spend a whole day hitching and walking just to be sent all the way back again.  I don’t like doubling back.

Whilst far away in worry land, a car pulled up and offered me a ride. My first Tibetan hitch. They only drove me 30 odd kilometers, but it was far enough to be committed to my path! I walked across the next village and carried on to nowhere in particular, joining some Tibetan ladies in a bit of chit chat on the run- I didn’t understand it at all, but it had to be good, I had them in stitches! And then started the accent. Things were getting steep! 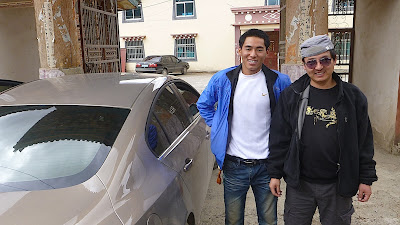 2 trucks, a tractor, and several herds of wild horses later, a car flew by so fast that I actually fell off the road. It was either the elegance of my fall or a sense of deep routed guilt that made them double back and pick me up, either way, I was in. 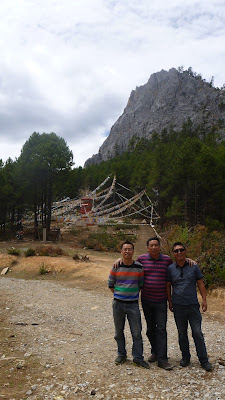 They had mumbled something about not going to Litang so I figured I was only going a couple of villages down and kept my pack on my lap, not wanting to get too comfortable. It was only 4 hours later, when we were far from anything that even resembled a road that I started to ease in. The driver had a GPS (and a beer) and we were racing up mountains and around rivers and it was a mad quest to prove the capabilities of the car.

It was a wild ride over and around and through rocks and mountains and rivers and herds of yak and sheep and villagers and I felt a little guilty that I had nothing to offer in return; but once I showed them my altimeter I was in. I had them driving towards the biggest mountains they could find just so to reach the 5000m mark. We were just short (5m). But the scenery from way up there was phenomenal!

At some point I glanced at the full back of the truck and wondered if they were all out on a boys camping trip. To be honest I had no idea where I was and seeing as China has blocked the GPS function on my camera, even my compass doesn’t quite work properly – they could have been taking me anywhere!

Darkness was rapidly descending and by 9pm (sunset, that’s the beauty of having a massive country with only 1 time zone) we were still in the middle of somewhere. And then we climbed a mountain and on the other side was a road. A tarred road. 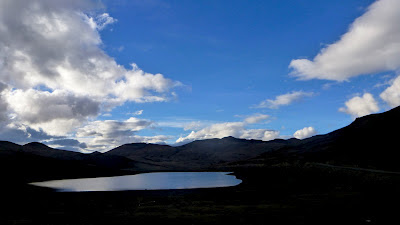 I flipped through my phrase book and found “Women xianzai dao nail le?” (where are we now?) ... “Shan-go-li-la” (Shangri-la) and then I flipped out a bit because I realized that we’d just been on an 11 hour joy ride. Which was nice, but…

By 11pm we were finally in some sort of actual civilization and I may have been wrong, but it wasn’t Shan-go-li-la so I looked perplexedly at my new found friends and they seemed to know what I was thinking “Shang-ho-liii-la something something something  bu (not) Yunnan” they said and I accepted and thanked them kindly and pondered off to find a more affordable hotel. It’s amazing how you can negotiate down from Y580 to Y90 for a room… 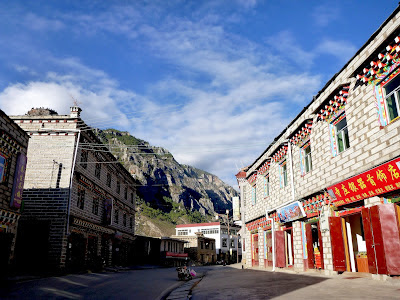 Tuesday bought with it even more confusion. Very picturesque confusion.  I had no idea where I was and my map didn’t list any other Shangri-la’s and nobody spoke English, or Mandarin for that matter and everything was written in Tibetan so nobody could even understand my hitching sign and although the village was beautifully paved, there didn’t appear to be any roads to anywhere in particular.

With all the Tibetan about I had to wonder if I’d illegally crossed into Tibet and had to wonder what the implications are for doing such. Even if I was now in Sichuan, I’d crossed illegally too… hmmm… It was going to be an interesting day!

The village was all run on generators, but somehow I found stray wifi and I tried google translate, but no – even google doesn’t do Tibetan! I tried to search for other Shangri-la’s  - but with all the internet blocks in China it was a failed mission! So I did what any of you might do, I picked up my pack and started walking asking any and every person for “Litang?” I walked and walked and found a road and walked some more and a couple of hours later a car finally passed and I got a ride to Doa Cheng. Doa Cheng is on the map. 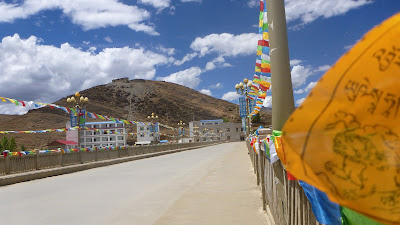 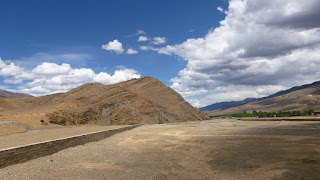 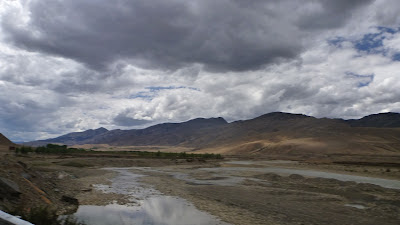 From there it was a long wait until a mini bus driver offered me a “mianfei” (free) ride all the way to Litang. 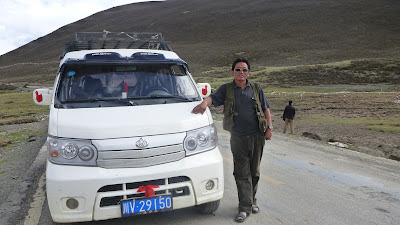 Now despite being on the tourist trail (for some bizarre reason) – Litang is a hole of a city – it has no soul, no vibe, no nice hostels… I was greeted by a mob of cowboy hatted Tibetans trying to chase me into moldy guesthouses and I have low standards but really… I spent one night observing the caterpillar larva trade on the street, eating my worst Chinese food yet, and then listening to the dogs howl at the full moon till 6am. At first light I left. In the rain.

I was feeling quite sorry for myself as I walked up yet another hill with an umbrella and a poncho and a wet sign, but then I looked up and saw the snow capped hills surrounding me and I felt a lot happier about life.

15 minutes later Jeshu pulled up and I was off again. His snazzy car thermometer measured 1degree. He was great. We chatted about everything from the weather to work to “do you think that China’s present rural reform is making progress?” gotta love the ‘friends’ section of my phrasebook. And when we ran out of conversation he played some bad club anthem CD and he flashed the lights and we danced as we sped past hundreds of cyclists on a terribly muddy road. 200 km took a whole day. 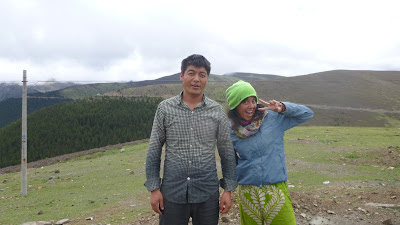 Tagong was incredible. The hills were alive with prayer flags and monks. It was kind of like being in a sort of western – One dusty road in, one dustier road out – but yaks and short people instead of life size gangsters and big horses …

A beautiful Tibetan lady pointed me to the hostel and it greeted me with a dead horse and a viscious dog. I’d been bitten twice that week already, I’m starting to develop a slight phobia of rabid looking dogs. I almost ran away from the hostel owner who was trying to get me in and I’m quite glad I did because just down the road, under a beautiful rainbow I found a haven of niceness…Tagong won my heart and, because I’ve promised mum I’ll be in Chengdu by Friday the 15th, four days of my life! 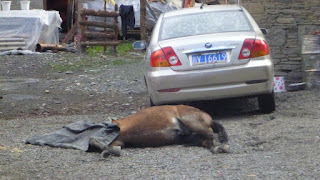 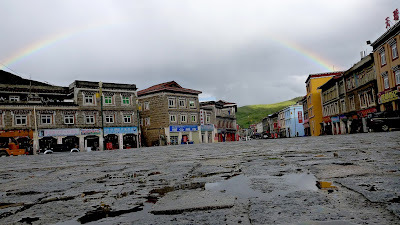