I had a moment of weakness this week. Trust me, it doesn’t happen very often (which is why I can fix tyres with nothing but grass,  petrol and a match; and how I know my limitations when carrying a month’s worth of supply shopping home on a bicycle; and why I buy cheap-ass single ply toilet paper), but every now and then I have to swallow my pride and ask for help.

Yes, it begun as a Sunday just like any other Sunday (or at least the last seven of them). I’d woken up far too early for my liking, had a pretend-to-be-nutritious fake yoghurt (pronounced “yow-gurt” for those of you who continue to pronounce it incorrectly), jumped in the shower, and sped off to work. I was early too; so I seized the moment and some super glue and I stuck my badly abused running shoes back together. I sipped a delicious cup of coffeeish liquid as I forced the balls of my feet into the ground while the glue dried.

And then the work day began and so did my torment. As soon as I moved I discovered my folly. My left shoe had allegedly been ripped right through, so as I had filled the gap with super glue (and quite a lot of it), it had gushed in, seeped through my sock and coated the ball of my foot. And it was good superglue.

When I finally made it home for work I realized it was time to take the plunge and ask for help. So I consulted the world’s super power of wisdom – Facebook – and got some really great suggestions because most of my friends are ridiculously wise:

Luke: Soak it in warm water?

Mark:  go to hospital - they cut it off!

Langa: The universe is trying to tell you something

Taneal: Soak it in warm water with lots of sunlight washing up liquid!

Matthias: Yip, nail polish remover works or anything with an acetone base. Warm soapy water also does it. In sticky situations you can also take a blade and VERY gently cut between the skin and the glue VERY slowly.

Wendy: You wear it till the soles get worn out. Could take years.

Michael: Only one thing to do, amputate the foot.

David: Have you ever seen the movie Saw?

Neale: I reckon you should go on a trip as far as you can until the shoe falls off, or wears out. Pretty good excuse for a journey...

And while some of the suggestions really made sense (especially the last one) I had far too many options to consider.

And then my lovely housemate, Daisy, came in and after I tried to talk him out of it for his own good (my shoes aren’t quite as fragrant as I would like them to be) he made my push my pride aside and sit on the floor. With one big tug he ripped my shoe free. Talk about a knight in shining armour (and yes girls he is single if you’re interested).

I then followed his example and ripped my sock free. And while it was good to be surrounded by so much freeness; a chunk of my foot remained glued to the chunck of my sock that was still glued to the inside of my shoe. 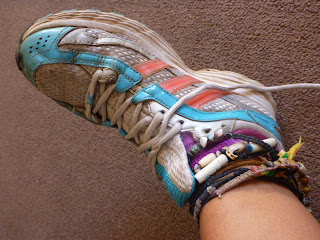 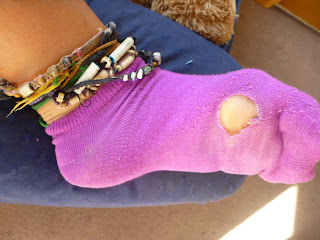 The moral of the story is that you should sometimes buy cheaper superglue and also that we all need help sometimes. And sometimes it hurts. But we need it. And as much as I would have loved to use the stuckness as an excuse for another trip, I think I definitely prefer to be a barefoot gypsy. 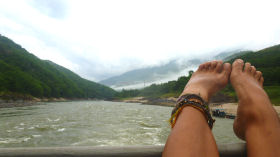